The Flinders Tour 26km is a trail running event within the Glasshouse Trail Series, based at Beerburrum State School on the Sunshine Coast, Queensland, Australia. There are 12.5km, 26km and 52km walk and run options.

I ran the Flinders 26km in July 2016, and while this is almost a year ago now, I’m including this report as it was my first ever trail run “race” and – it’s an annual event so it might be of interest for first timer trail runners each year. The run is part of the Glasshouse Trail series, with this stage being named after Matthew Flinders, the first European to climb one of the Glasshouse Mountains (Beerburrum) in 1798.

Heading to the start line

My main training focus for the first half of 2016 was triathlon and in particular the lead into Busselton 70.3 in May. Once I had completed the Half Ironman, I continued to focus on my relatively newly found love for trail running. Thanks to some encouragement from the motley crew of NUTRs (Noosa Ultra and Trail Runners) I decided to take on the 26km at Beerburrum as my first trail “race” – and it did not disappoint! To give you a rough idea of training, I was running about 50kms a week – mostly on trail – before the event, plus some swimming and riding. Nothing massive, but I was enjoying the trail so much!

Based at Beerburrum State School, it’s fair to say the contrast between this trail run event and a Half Ironman triathlon is stark. There are certainly no red carpets to greet you at the end; no numerous number stickers and rules and regs and the understated nature of the whole event in general was something I fell in love with immediately. The simplicity of trail running like this is definitely part of its charm – collect your race bib; pin it onto your front (on a side note I’ve noticed there’s a tendency to stick your bib onto your thigh instead of the front of your shirt for trail runs… haven’t seen this in road runs or triathlons…); make sure you have some hydration on you (often these runs are “no cup” events so it’s BYO); line up casually in a group near the start line; someone shouts “go” while you’re most likely chatting to some buddies around you (some of whom may still have a cup of coffee in hand…) and off you trot. So casual (unless you’re a front runner of course, but the set up is similar!).

The 26km course takes you on a large, single loop north from the school at Beerburrum, and then west before heading south and back east up towards the school again. The vast majority of this – with the exception of a little stretch at the end, is run on trail. I had been told previously that this wasn’t a “technical” course (not knowing exactly what that entailed having not spent much time on the trails) and it’s true – there’s a mix of fire trail and some single track, but nothing that will have you wondering what you signed up for – other than those moments where you can’t see a directional arrow and wonder if in fact you’re running the right way. The shorter 12.5km distance was sadly especially affected by this, as some “clown” shall we say, took away and changed around their course markers, leading people to either get lost and run longer, or shorter than the marked course. We did reach a crossroads at one point where no course markings were evident, but this is the beauty of a friendly community – as a little discussion with a growing nucleus of uncertain runners led us to find a chalk arrow on the ground and off we ran again. I get the impression that (at my level of “speed” at least) the trail community is a pretty supportive one and there’s not too much trampling-over-each-other-to-win kinda attitude going on in these lower key events.

The big difference between my road running experience and trails up to this time had definitely been the elevation. This course wasn’t too bad – Strava tells me I hit 447m of climbing over 26.7kms. Not too hectic, although enough for my increasingly gammy knees, which left me pretty much hopping downhill by the end. But, back to the 447m over 26.7kms – that’s another weird thing if you’re used to road running or triathlon – inaccurate distances! For the most part, if you sign up for a 10km run, you cross the finish line at 10kms. Simple right? You are not – as we were – looking at your watch approaching the predicted finish distance, to find yourself still in the middle of the bush somewhere, wondering (again!) if you may have missed a turn and are off course! And yet, this is all part of the adventure of trail running (although I imagine it may not be that wonderful if you stray miles off course during an ultra). You can view the run course on the Glasshouse Trail Series website – images below grabbed from the map section, or look at my Strava entry here.

Not the same elevation I clocked!

I was fortunate to start the run with a relatively new found friend, and to find myself running the majority of the course with another friend of a friend – passing time by chatting and getting some advice from his own trail experience, like – “you can walk the hills”. Yep, that’s right, you can walk the hills. This no longer seems weird to me now that I’ve clocked a few more miles on trail, but at the time I remember thinking “this is a running race, and we are walking” (albeit happy to have a break!). Nowadays as I train for my first off-road ultra, show me the hills, the low heart rate and the walking!! Other advice included – check out the aid stations. Trail run aid stations are a gold mine of tasty things – watermelon, crisps and I’m told the longer the run, the more exciting the treats. A lot more yummy than gels, let me tell you. They’re also a place where you can stop and have a chat – another thing I had not experienced on road/in a triathlon. I’m generally trying to get past the aid station as quick as poss… 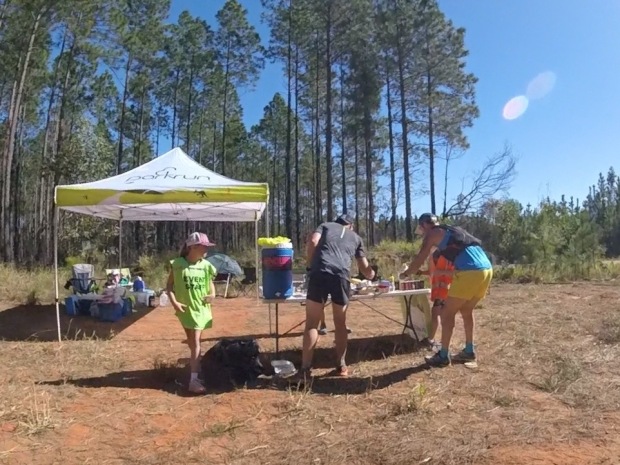 A lot of love there Simon… Thanks for the pics Rory

We spent a lot of time not seeing anybody, which made me even more grateful for the company and the chat to pass the time. We also felt like this must mean we were miles behind and would be last to finish, so it was a pleasant surprise to discover that finishing in around two and three quarter hours meant I actually came in 14th of 51 females and 37th of 92 overall. For an average runner, I’ll totally take that.

Overall, if you have the legs to cover the ground, I would absolutely recommend this course to first timers. Some lovely scenery running around the Glasshouse Mountains; not too much elevation and a very non-intimidating, low key vibe. Oh and my favourite bit – a lovely pottery mug instead of a medal for finishing. What do people even do with their medals?! I don’t know, but I know you can’t enjoy a good coffee out of a medal… 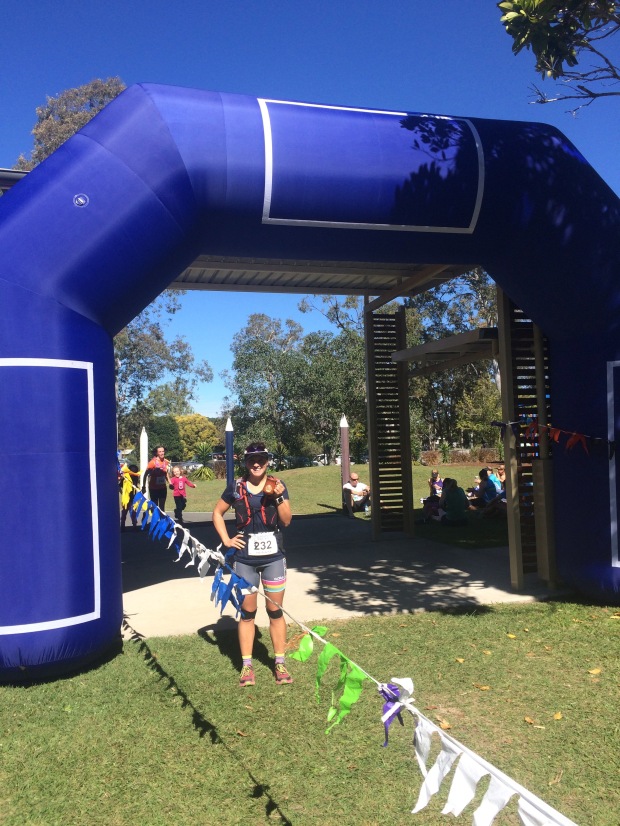 A finish arch, but not officially the finish… Proud finisher with my mug! And yes, I brought a little triathlon lycra with me onto the trail #antichafe

There was a choice of mugs but I chose this as it was Beerburrum, the race location

And just to reiterate, no Ironman red carpets here… 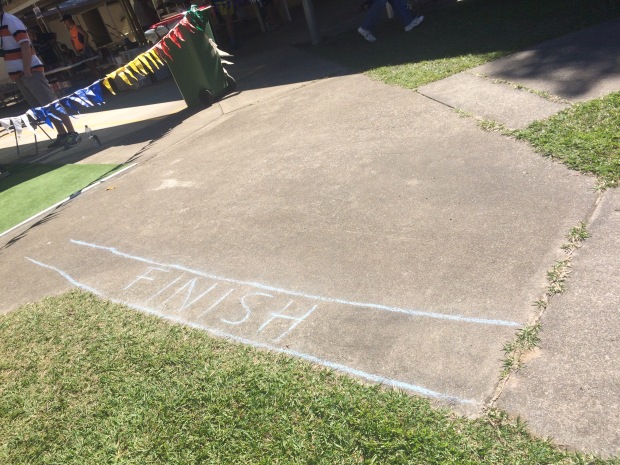 Kit I used on the day: