I’m usually a disaster at writing updates straight after a race; but since I have a day to fill before my flight out of Perth to the UK, let’s give this blog efficiency thing a crack… (oh wait, it’s now a different year, and I’m sharing this…. Classic Sarah). This is a wordy version of our experience… If you would prefer to just watch a few short video clips of each stage – then check out this post instead!

Cape to Cape – my first stage race on the bike; where do I even begin?! Here are a few thoughts on what has been a whirlwind of a week, and an absolute cracker with my Team SheRazz partner and the real engine of the team, Jess.

I can’t even really remember how this whole thing came about, but safe to say, I’m glad it did. This year has flown by and before I knew it Team SheRazz (Jess – who I only met in the last year, while out riding the trails, and I) were boarding our flight in Brissie to fly 6 hours to Perth; bikes (and Elizabeth Arden 8 hour cream – insider joke) in tow.

The stunning Margaret River played host to the event, which kicked off at the beautiful Leeuwin Estate with a time trial for the elites in the “black dot” category. We registered, bumped into some newly made friends from our flight, and kicked back with a glass of vino while watching the elite pairs battle it out. As it turned out, riding in the Open Pairs category, the majority of the women in our category were in fact riding the time trial… *cue the extra non elite glass of wine.

Quite the challenge! In hindsight, I would definitely say that day one was the toughest of the four days. Albeit the shortest stage at 38KM, it also had the most amount of climbing relative to the distance (over 1000m). And when I say climbing, this in fact translated to slowly, but surely, hiking the bike up several long hills.  Even if we had wanted to give the climbs a go (and don’t get me wrong; we wouldn’t have made it the whole way – it was loose and rooty and steep), we quickly gave in to the fact that due to the congestion on course, there was no way any riding was going to happen. So on we trucked, pushing up “Heartbreak Hill” – the notorious long, steep climb at the start of the course and then onto Sally’s Hill.

For me, this stage, deteriorated into basic cramp management. I’m not sure if it was the fact I was riding a brand new bike which I had only had a few little rides on this week, or the endless hike a bike, or undercooking the electrolyte intake, or a combo of all (most likely)… but those cheeky twinges started in my quads and before I knew it, my quad muscles were cramping and it became a mission to spin as much as possible and not put any weight through the legs. I wasn’t the only rider unceremoniously lying on the side of the trail – it was as if the cramp was infectious and all around us, people were coming off grabbing their legs in pain. Gotta love a little Type Two fun on Day One.

This was also the only stage where I took a stack. At the foot of a steep descent, I managed to totally miss the corner and slide out into a pile of mud. It made for a soft landing at least.

I was certainly excited to see the beautiful Cape Leeuwin Lighthouse as we rolled down the gravel road on the home stretch. And incredibly grateful to my team mate, Jess, for patiently waiting for me at points while I tried to stretch out the legs and had to hop off my bike on steep pinches. It was definitely a tester, but complete with sweeping views of the coastline and an iconic lighthouse at the start/finish, it was a pretty awesome day.

Day one tip – if you want to seed in an early wave start for the rest of the week, get yourself to the front of the Day One start. We hadn’t really appreciated how this worked, so we started pretty much at the back, and subsequently couldn’t pass anyone on a super congested course. This meant we were one of the later wave starts for the rest of the race and faced the same congestion elsewhere. It didn’t matter to us really as, although we worked hard, we weren’t trying to place. Just a consideration if you want to take this a little more seriously! 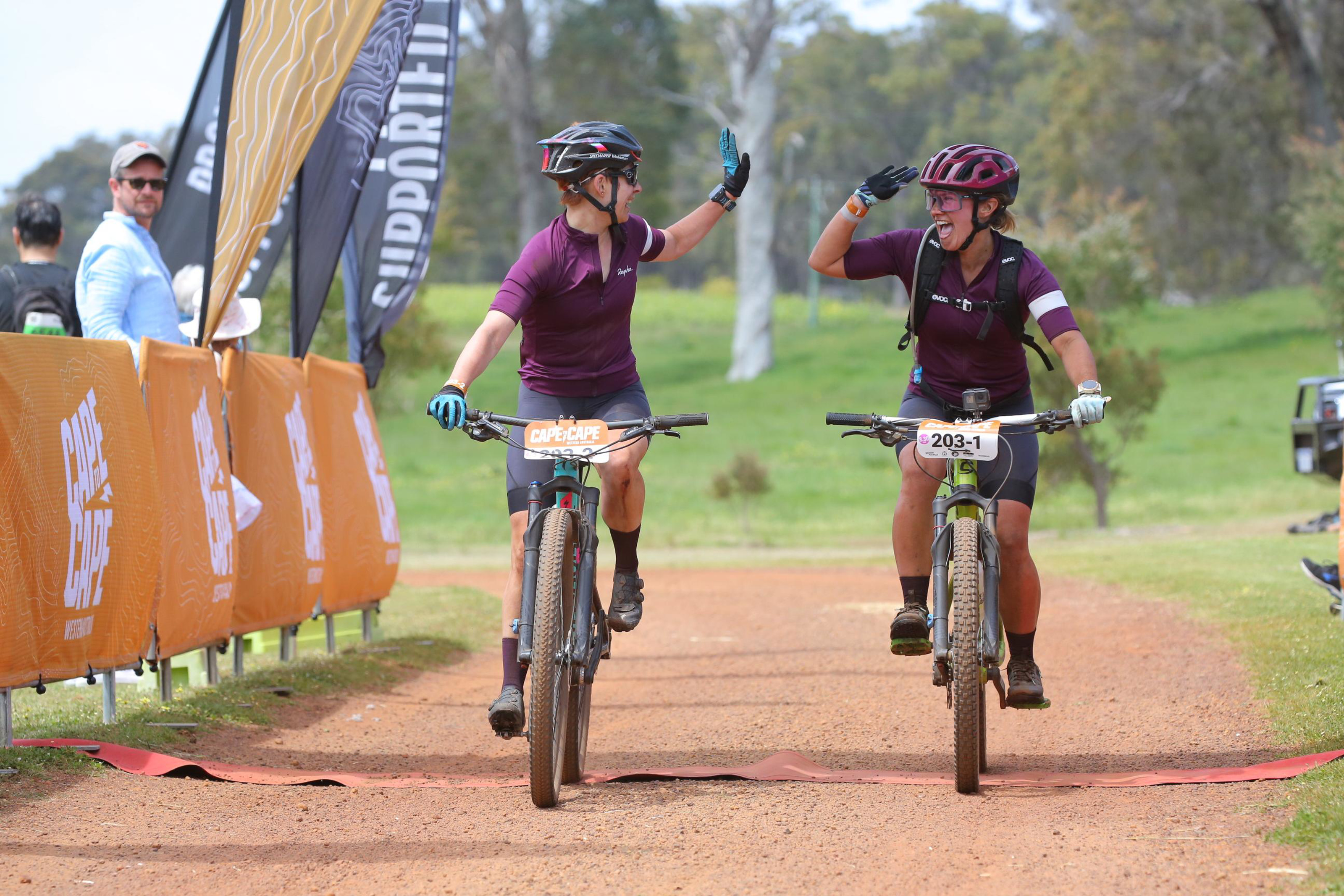 “Another awesome day! Albeit 35kms ish longer than yesterday, with it being a totally different style of course, it only amounted to one extra hour in the saddle… Rolling out of Leeuwin Estate winery; fantastic day of cracking views; more sand than you can shake a stick at; beautiful singletrack; water crossings and an overarching theme of me just clinging onto the Jess Train 🚂”

After yesterday’s cramp fest, my main priority today was to inhale all the electrolytes and keep the cramp at bay. As it turned out, it was the perfect stage as, albeit considerably longer than stage one, with the same amount of climbing, it flattened out to be a fun stage of fast gravel road and lots and lots and lots and lots of sand, mixed in with a few creek crossings, where we later had a good giggle at Jess’ bike carrying technique 😉 I finally found my strong point, beyond photo taking, and Bruce was slung on my shoulder like a total pro (… while actually, the pros rode through the water, but us pink dots at the back were all stopping, carrying our bikes, and getting our feet nice and cooled off).

“Highway to Hell” was our undeniable highlight today and left us singing ACDC for the remainder of the trip (fun, until you realise you both only really know one line of the song… “I’m on the highway to hellll….”). I never thought I’d remember fondly a long, super sandy descent, but the elevation and views opening out across the ocean at the end of this stretch were just breathtaking. Not to mention, we both managed to keep rubber side down in spite of the fast descent and miles of deep sand. That being said, Jess ticked off her spill on this stage… and we both stayed upright for the remainder of the race.

I (and a few others) firmly rode the Jess train on this stage and finishing amongst the vineyards at Leeuwin Estate was a magical way to round off a cracker day on the trails. That, and the glass of vino and pulled pork bun, sitting out in the sun with our muddy faces, while somebody else washed and lubed our bikes. Stage racing bliss. 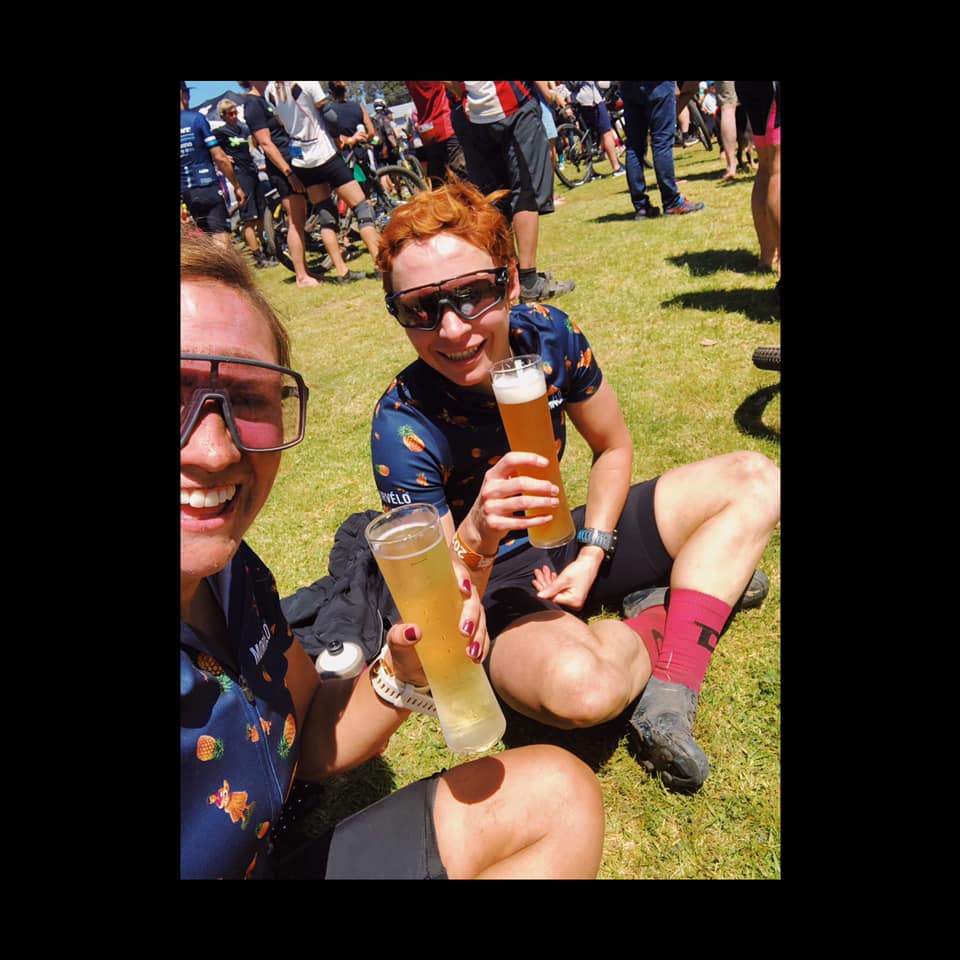 “Stage 3. The only stage where I really could have done with some suspension… and I had it locked out the whole time… Also a good stage for footage because of 20kms of singletrack… and the GoPro froze… But, so many laughs, more hard work and we made it!”

A journey into Middle Earth. Opinion of Middle Earth was pretty polarised when we chatted to our fellow riders who had tackled this stage in previous years. A little like Marmite – love it or hate it.

We went into this stage looking forward to it being slightly more technical and excited for some singletrack fun times. 18kms of grinding gravel road led us to…. a …. very… large…. queue…. We waited half an hour to cross a creek. Which turned out to be a good laugh as I sank thigh deep into some very murky water, while keeping Bruce PenderPickle nice and dry.

As it turned out, Middle Earth was a network of beautiful single track. Beautiful in terms of scenery… track wise, there were most definitely some fun flowy sections; log rollovers; tree ride throughs and ALOT of rocks. As it transpired, while enjoying a post ride cider on the grass at the finish line at the Colonial Brewery, I noticed I had ridden this entire stage with my rear suspension locked out. Yep, the only stage where suspension would have been pretty sweet, but nope, there I was bouncing off every rock thinking how much I missed the extra travel in Sparkle McKnight. What a rookie. Cue, more laughs. 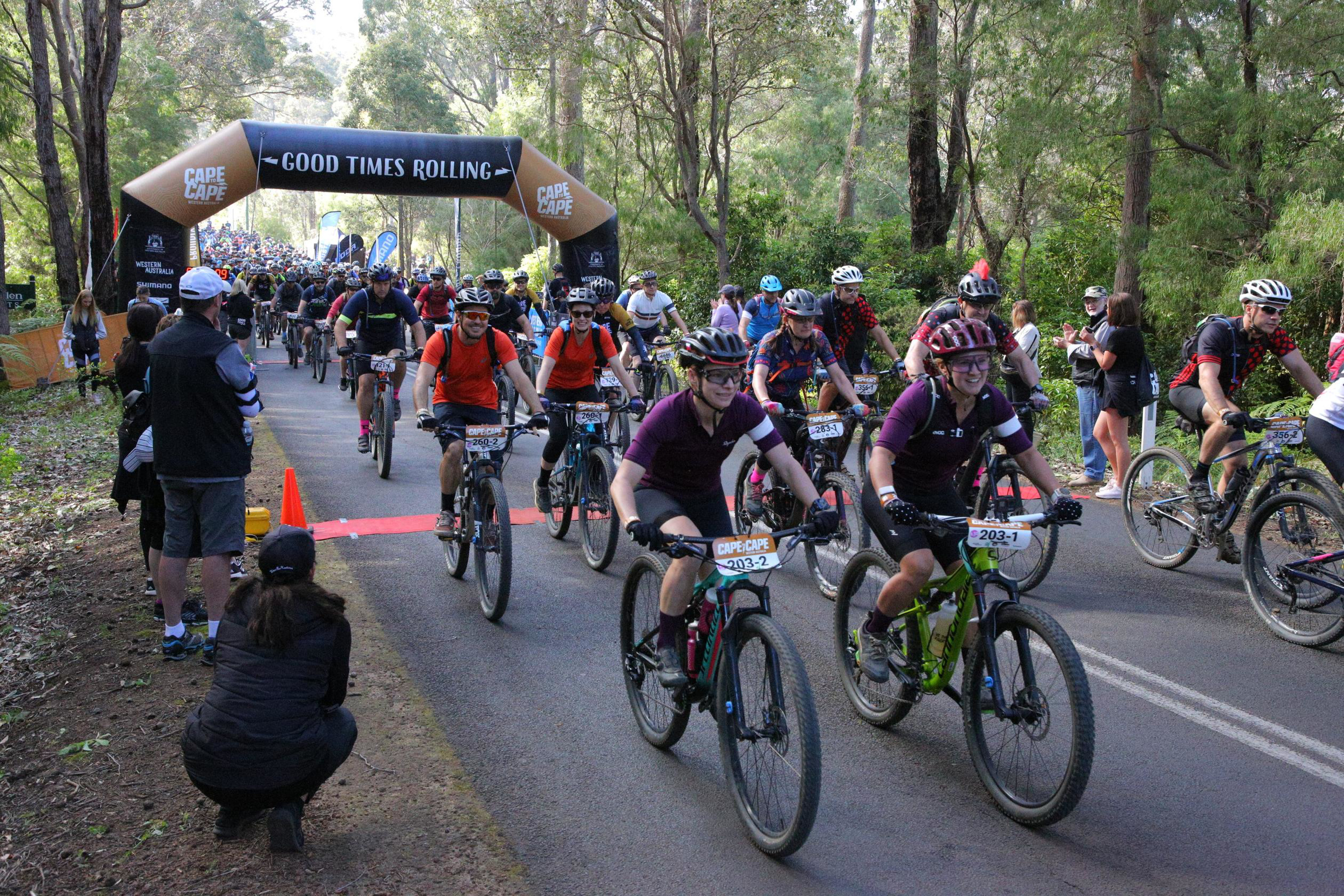 “We did it! 13 hours 20mins on the bike over four days and almost 3,500metres of climbing. But the more important stats are: endless laughs; zero mechanicals and miles of beautiful Margs trails. Thanks Jess for being the best team mate – Bruce PenderPickle and I will forever roll our eyes knowingly when we see you lock in on a target ahead; watch your wee head and shoulders dip and hear the click of your gears….. We loved chasing you around you little weapon 😉😘 #teamSheRazz”

Over the PA before we rolled out this morning all I heard was, “It’s something between 37 and 41km…” which rather summed up the way of things with this race. Don’t get too attached to the numbers in the brief…because more than likely, you’ll be climbing more than you expect! But everyone’s in the same boat right, so it doesn’t really matter. Just don’t get fixated on the stats, that’s all.

Excitement was high with this being the last day. High fives with newly made friends in our “pink dot” wave… and shouts of “Hey Team Sherazz”, made for some really good feels.

This stage featured heaps of single track and some fun flow trails, along with pine forest and more gravel. This was the last time this stage will be running in this format, due to forestry operations, and I’m glad we had the chance to ride it.

Energy was high as we crossed our final finish line to receive our Cape to Cape medal, and chill out watching the presentations with a local gin and tonic.

A truly awesome four days and one I remember with a huge smile. Riding in a pair definitely added to the banter levels, which, on today’s stage – which felt pretty long towards the end – was absolutely ideal!

Definitely keen for more stage race action after this one…. 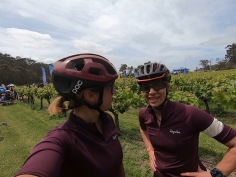 Kit from Rapha and Morvelo