Although some time has passed since I ran these now (seems to be a recurring theme in my somewhat delayed race reports!) I thought I’d share a quick overview of a couple of the shorter trail runs I’ve entered on the Sunshine Coast in the past year. The 8km at Ewen Maddock, as part of the TREX Offroad Tri series and the 12km Cooks Tour, Glasshouse Trail Series.

The overarching theme of this race was – HEAT. South East Queensland saw the mercury rising to record temperatures over this weekend and race day saw sweltering temps of 36C. You have to remember that in Queensland, this heat is combined with killer humidity, not so fondly known as “stumidity”.

This trail run was part of a two day offroad triathlon event, with the run available as a standalone race if you weren’t doing the rest of the tri (which I wasn’t). Both 4km and 8km distances were on offer. I was only really just getting back to running at this point but decided 8km would be okay, along with a bunch of friends.

How wrong I was! The run wasn’t scheduled to start until 3.45pm, with some of the triathletes having already raced in the morning. Due to the extreme temperatures, unbeknown to us, the race was pushed back an hour. This meant we arrived an hour prior to the race for registration – to find the rego wasn’t going to open for an hour. Cue two hours sitting in the sweltering heat at Ewen Maddock Dam with absolutely nothing to do but wait. I hate to criticise event organisers who put so much time into organisation, but to not post anything on their social media or send out any communication about this delay – absolutely ridiculous. All that was posted was a one liner on their website. And don’t even get me started on the website – we all agreed that even working our way through what should ordinarily be a simple online registration for the event had been a frustrating, cryptic task in itself. That process in itself should have been warning enough of what was to come!

Some of the boys took a dip while waiting for the race start!

More waiting… and getting to know other trail runners!

Anyhow, once you’ve paid and shown up, what more can you do than wait. And wait, we did. By the time the race start came around, I’m pretty sure enthusiasm was at an all time, heat induced low. But off we ran. The course itself is comprised of 2 x 4km loops. Ewen Maddock is home to some very pretty bush tracks and there was a fun combination of flowy single track stuff and some more open trails with a few pinches thrown in for good measure. Perhaps a combination of lack of fitness and hanging around in the heat, but unfortunately I was totally over it by 2.8km. I distinctly remember looking at my watch at that point and thinking I’d call it a day at the 4km mark at the end of the loop! “Sadly” for me, I ended up running the 8kms I had paid for as I totally missed the turn off to the finish line at 4kms! I’m not a massive fan of multiloop courses at the best of times, but when you were already over it in the first loop – let’s just say I don’t have fond memories of that race other than the general group banter we had before and after!

Bibs on – ready to go

Morgan discovering he brought the GoPro without the memory card… One of those days!

Smiles from Simon and Morgan at the end!

I’m always reluctant to review events badly as I absolutely appreciate the huge amount of effort that goes into their organisation, but I’m afraid to say, with the combination of a terrible sign up process and the absolute lack of communication which left us sitting out in the sun in the mid 30s for an extra hour or two (not to mention the lack of results shown for a few days…. for those who wanted to know where they placed, not me!), I won’t be rushing to sign up for events organised by this group in the future. Don’t get me wrong, the weather is not something we can control, and the delay was an effort to improve our experience, but the lack of comms was unfortunate. On the plus side, with all the time spent hanging around, there were plenty of opportunities to meet new faces! And now that I’m running 80km weeks, I can look back and be thankful that it’s not so often now that I’ve had enough by the 2.8km mark 😉 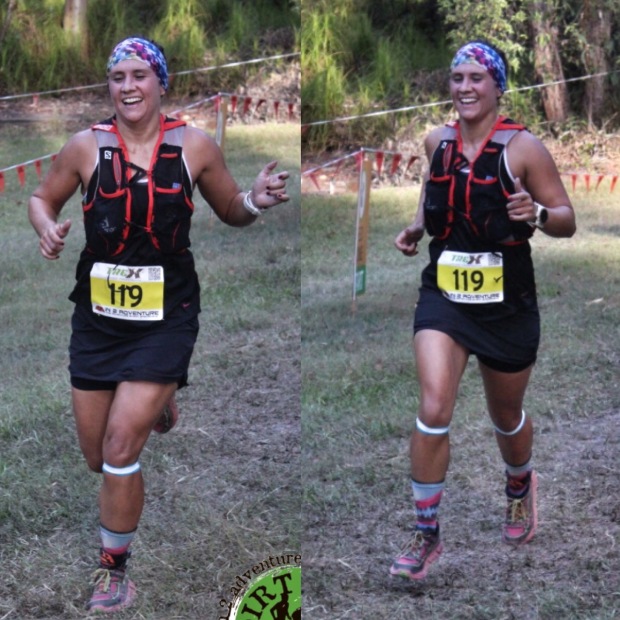 And noooo, I wasn’t purchasing these dreadful race photos! #eyesclosed

I would put up my results anyway, but to be honest, I can’t even find them online now… Enough said.

Kit I used on the day: